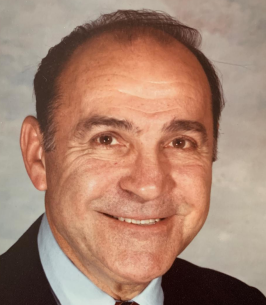 Mr. Del Casale was born November 28, 1924, in New Brunswick, NJ to the late C. Thomas and Rose (Dispaltro) Del Casale. He was a lifelong resident of Somerset.

Thomas graduated from New Brunswick High School in 1942. He continued his education at Rider College, where he earned his bachelors degree in education. He then obtained his masters degree in education from Rutgers University and a Certificate of Administration from Seton Hall University. Mr. Del Casale served 36 years an educator in Franklin Township from 1956 to 1992. He was first Principal at the opening of MacAfee Road School and served from 1966 to his retirement in 1992. Tom was musically talented, especially with the Saxophone and Clarinet. He was well-known in the New Brunswick “Big-Band Era”, running his own band and entertaining crowds on weekends.

He honorably served in the US Navy during World War II from 1944 to 1946 as a petty officer. Tom served aboard three Heavy Coursers: the USS Boston, USS Baltimore, and the USS Quincy for eighteen continuous months and alongside the Fast Air Force Carrier Task Forces in the South Pacific. He served in the US Navy band as well. Tom was a decorated sailor, with nine Major Battle Stars and the NJ Distinguished Service Metal by acting governor Donald DiFrancesco in 2001. Tom was inducted into the New Brunswick Fast Pitch Hall of Fame Softball New Brunswick League by the New Brunswick Dept. of Recreation. He was also a life member of the Community Fire Department.

Funeral services will be held Wednesday, June 15, 2022, at 10:00 A.M. at the Gleason Funeral Home. Entombment will follow at Franklin Memorial Park in North Brunswick.

In Lieu of flowers, please consider donations in Mr. Thomas Del Casale’s name to the National WWII Museum at https://www.nationalww2museum.org/ or the World War II Veterans Committee at www.americanveteranscenter.org/vet-committees/wwii-veterans

When visiting the funeral home, the family kindly request everyone to wear a face mask. Thank you.