To share your memory on the wall of Sarojini Thanabalasingham, sign in using one of the following options:

Consider providing a gift of comfort for the family of Sarojini Thanabalasingham by sending flowers.

We encourage you to share your most beloved memories of Sarojini here, so that the family and other loved ones can always see it. You can upload cherished photographs, or share your favorite stories, and can even comment on those shared by others.

Posted Jan 26, 2021 at 08:42pm
Dear Kannan and Eason,
We are honored and blessed to have known your Amma and our beloved Aunty Sarojini. She was truly a blessing in our life and we will miss her badly .May our Lord and Swami Shanthanantha bless and comfort you and your family during this time of grief. When we wished for her birthday last year in June, she was so happy. Please accept our sincere condolences.
Love, Nirupa, Akileswaran and Children.
Comment Share
Share via:
BK

Posted Jan 25, 2021 at 09:34am
Mrs. Sarojini Thanabalasingham fondly known as Sarojini aunty among us will be greatly missed. Where ever she went she carried an energy that brought happiness and enthusiasm. What I will remember always Sarjoini aunty will be her pride. Whether she walks into a community event or family gatherings, first thing we want to do is stand up in respect. Even to those who don’t know her achievements by her appearance she showed she is a well learned woman. In one on one conversation she shared her experience and provided her advice on bringing up children to managing difficult situations. Mrs. Thanabalasingham showed us how to lead a life as a good mother, wife and a friend. We will miss you Sarojini aunty, Rest in peace.
Comment Share
Share via:
YS

Posted Jan 24, 2021 at 05:48pm
Eason, Kannan and families, please accept our deepest condolences on passing of Aunty Sarojini. We came to know Aunty well during the six years that Ashwini took vocal lessons with her many years ago. We are very thankful for her dedication to music and her commitment to imparting her knowledge to her students. We will always remember her frankness, friendly nature and ever smiling face. We consider it a pleasure to have known her.
Ashwini, Yaso and Nash Sivaganesh

Posted Jan 24, 2021 at 02:26pm
Sarojini Aunty always had a smile on her face. She taught music to our children. She instilled in them a love of music. Her passing is a loss to the community. May she Rest In Peace.
Comment Share
Share via:
VR

Posted Jan 23, 2021 at 08:32pm
Please accept my heartfelt condolences on the passing away of my loving and long time friend Sarojini. I recollect all the memories of her great musical performances and also the great memories of what we both jointly did in the field of music. It is an irreplaceable loss for her family and friends. May her great soul rest in Eternal Peace. Aum Shanthi Shanthi Shanthi. - Vasanthi Rajendram
Comment Share
Share via: 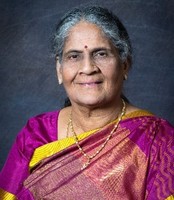 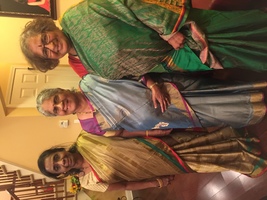