To share your memory on the wall of Sam Goldman, sign in using one of the following options:

Print
Samuel Goldman, of Somerset, New Jersey passed away on Wednesday, April 21st at the Somerset Woods Rehab & Nursing Center. He was 90.

Born and raised in the Coops section of the Bronx, Sam moved to Riverdale, NY upon marrying his wife, ... Read More
Samuel Goldman, of Somerset, New Jersey passed away on Wednesday, April 21st at the Somerset Woods Rehab & Nursing Center. He was 90.

Born and raised in the Coops section of the Bronx, Sam moved to Riverdale, NY upon marrying his wife, Isalene. It was there they raised their daughter, Melanie, and were active members of the community. Sam moved to Somerset, New Jersey in 2016 following the death of his wife.

Sam graduated from Hunter University and worked as an elementary school teacher throughout the New York City school system before retiring in the mid-1980s. He then returned to school earning his Masters Degree in Family Counseling Service where they both worked throughout the 1990s.

He was an involved member of the Society for Ethical Culture and the Ben Franklin Club, both in Riverdale. Sam loved photography, videography, Red Sox baseball, journalism and distributing his family newsletter. He loved to swim and enjoyed spending his summers at the Skyview Pool Club.

His wife, Isalene Goldman died in 2015. He is also predeceased by his sister, Mildred Goldman-Hochteil.

Surviving are his daughter and son-in-law, Melanie & Jimmy McNamara of Somerset, New Jersey; and 3 grandchildren, James, Tess and Lauren.

Private funeral services have been held under the direction of the Gleason Funeral Home, Somerset, New Jersey.
Read Less

Consider providing a gift of comfort for the family of Sam Goldman by sending flowers.

We encourage you to share your most beloved memories of Sam here, so that the family and other loved ones can always see it. You can upload cherished photographs, or share your favorite stories, and can even comment on those shared by others. 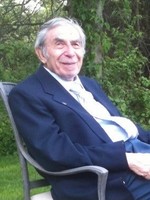