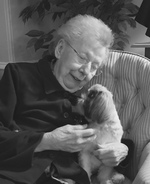 Ruth Doris Sjogren passed away peacefully after a long, prolonged battle with Alzheimer’s dementia, on Monday, March 14th, 2022, in the Memory Care unit of Paragon Village in Hackettstown, NJ. She was 91, just missing her 92nd birthday.

Ruth was born in Roosevelt, Long Island, NY on March 22nd, 1930, to her Swedish parents, who lived in Gothenburg, Sweden. Ruth met her future husband at a Walter Ericson concert in NYC and they married in June 1952. They eventually lived in Bay Ridge, Brooklyn, NY, where the first two of three sons were born. Ruth and Roy then moved to Franklin Township, NJ in 1959, where the third son was born. Ruth raised her three sons and lived most of her life in this home. She moved to Belvidere, NJ after her husband of 45 years passed away in 1997.

Ruth enjoyed her family and friends the most, especially with their big circle of Scandinavian friends, affectionately known as “The Griggstown Group” with whom they vacationed many times. They enjoyed the outdoors and spent many summers at Kelm Pond in the Adirondacks in NY state, as well as taking numerous cross-country trips along different routes of the US. Ruth enjoyed travelling throughout her life, and has been to Sweden, the UK, Canada, Bermuda, and her favorite country, Ireland.

Cooking was a big thing for her, and Ruth enjoyed cooking for family and friends. She was a great cook and at Christmas, there was always a grand, traditional Swedish smorgasbord. Christmas and Thanksgiving were always big family events and created many lasting memories.

Early in her career, she was a secretary for the Scandinavian Travel Bureau and then Swedish American Lines in New York City. She eventually became a secretary at Sampson G. Smith Intermediate School in Somerset, NJ, where she stayed until her retirement.

Ruth enjoyed music, and she played the piano. There was always a piano or an organ in the home. Like her husband, she enjoyed listening to jazz trios and quartets, and there was always music in the house. Ruth’s mother acted during her youth in Sweden and her father was an accomplished singer and head of a theater in Gothenburg. Ruth was also an avid reader and a lover of cats, and there was always humor in the house. She was a Lutheran by faith and raised her sons that way. She and her husband spoke Swedish, and her Swedish heritage was very important to her. Like many of their Scandinavian friends, Ruth and Roy were in a Vasa Club, and every summer, everyone went to Vasa Park in Budd Lake, NJ for the annual Scandinavian Festival.
Ruth is predeceased by her parents, Gunnar and Karin Yberg, her husband, Roy Sjogren, her two brothers Carl and Kenneth Yberg and their wives, and her middle son, Chris Sjogren.

There will be a private, family service for Ruth. In lieu of flowers, the family would appreciate donations to the Alzheimer’s Association – www.alz.org – in her memory. The staff in Paragon’s Memory Care unit loved her, and wanted everyone to know that Ruth was “…one of the good ones…”

Private graveside services will be Monday at Bound Brook Cemetery, Bound Brook, NJ. Arrangements have been entrusted to the GLEASON FUNERAL HOME, Somerset.