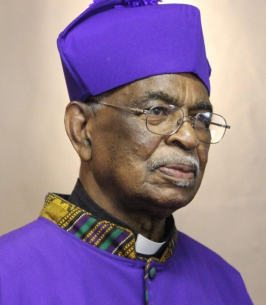 The Rte. Rev. Milton Francis Britto passed away peacefully at his home in Somerset NJ on Monday, November 14th surrounded by his loving wife, Rev. Saundra, and family. He was 94 years old.

Rev. Britto was born and raised in Brooklyn NY where he was educated in the NY public school system. He relocated to New Jersey in 1997 after his marriage to Saundra.

He faithfully served our country in the United States Army at the end of World War II and in the Korean War.

Rev. Britto was the Senior Bishop (Emeritus) of Triumph, The Church of the New Age – International. In 1958 he was ordained an Elder in the Church and served faithfully as Shepherd of the Manhattan Congregation and then the Brooklyn Congregation up until he was elected Senior Bishop in 2014.

He was introduced to Triumph Church by his first wife Hattie, who served faithfully alongside him in ministry for many years until her untimely death in 1994.

Rev. Britto pastored four generations of families and was known as a man of peace who loved everyone unconditionally. He encouraged the youth to stay in school and pursue higher education. He cared deeply for the elderly, the sick, and the indigent.

During his bishopric, he successfully led the church through one of the most tumultuous times of transition in its 110-year history. He instituted unprecedented changes including licensing the first woman clergy member, appointing the first female member to serve on the General Board, appointing the first female pastor, and granting access to the sacred desk and pulpit to the female gender. He also oversaw the re-opening of Brooklyn church in Canarsie with the establishment of Triumph Life Center & Spiritual Connections Café as well as the Triumph Church Mission in Nigeria.

Rev. Britto was recently honored by Bishop Alvin McCoy in his Holy Convocation as Bishop Emeritus of the Apostolic Ministries Inc. of Sharon, PA

By trade, he was a long-haul truck driver with the Teamsters union employed for many years he loved the big rigs. He gave up his CDL license in 1994, he said, because even after retirement he would still occasionally take a job driving which he knew he would do as long as he had the CDL because he loved driving.

Over the years he made some lasting friendships which to him were family. His childhood friend Mary Saunders and his army buddy David Williams; Prince John Melvin whom he was ordained alongside, Deacon Troy and Zell Pearson, George M. Barksdale, Sr., the founder of Tiberia Baptist Church, and others.

The Sacred Celebration from Earth to Eternity will take place on Saturday, November 19, 2022, at Gleason Funeral Home, 1360 Hamilton Street, Somerset, NJ 08873. Visitation to begin at 2 PM with funeral services from 2:30 to 4 PM.

Immediately following the service there will be a buffet dinner for family and friends at:
Imperia On Easton, 1814 Easton Avenue, Somerset, NJ 08873.