To share your memory on the wall of Rev. J. William Mickiewicz, sign in using one of the following options:

Provide comfort for the family by sending flowers or planting a tree in memory of Rev. J. William Mickiewicz

Provide comfort for the family by sending flowers or planting a tree in memory of Rev. J. William Mickiewicz

Born in New Brunswick in 1937 as one of two children of the late Margaret Mark Mickiewicz-Dill and Le... Read More
Rev. J. William Mickiewicz passed away on Thursday morning August 13, 2020 at St. Peter’s University Medical Center at the age of 83.

Born in New Brunswick in 1937 as one of two children of the late Margaret Mark Mickiewicz-Dill and Leo Mickiewicz, he attended Our Lady of Victories School, Sayreville, and St. Mary High School, South Amboy. He said that the seeds for his long-contemplated dream of becoming a priest were first planted by his mother.

Fr. Bill, as he was known, was a graduate of St. Charles College in Maryland and St. Mary’s seminary in Baltimore. He furthered his education earning a Masters in Theology from the Princeton Theological Seminary, certification in pastoral counseling from Princeton seminary’s Trinity Counseling Center and a second Masters in Pastoral Counseling from the New York Theological Seminary.

Father Mickiewicz was ordained by Bishop George W. Ahr at St. Mary of the Assumption Cathedral, Trenton, May 26, 1962. During the course of his 55 years of service to the people of both the Trenton and Metuchen dioceses, Father Mickiewicz served as parochial vicar of Blessed Sacrament Parish, Trenton; Our Lady of Mount Virgin Parish, Middlesex; St. Augustine of Canterbury Parish, Kendall Park; St. Anthony of Padua Parish, Port Reading, and served as the Chaplain at Douglas College in New Brunswick.

In October 1982, Father Mickiewicz was appointed pastor of St. Ann’s Parish, Hampton, and was simultaneously tasked with founding a new parish in nearby Califon. After years of celebrating the Catholic Mass within the local Presbyterian and Methodist churches, ground was broken in 1988 for the parish of St. John Neumann. The first Mass in the new church was celebrated December 1, 1990. During his tenure at St. John’s he was Dean of the Round Valley deanery (2002-2010) and Episcopal Vicar in Hunterdon County (2010-2012). Over the years, he served on the Presbyteral Council, the Diocesan Pastoral Council, and the Priest Personnel board. Fr. Bill continued his ministry at St. John Neumann as until his retirement in 2012. Even after his retirement, he made himself available for ministry especially at St. Matthias Church, Somerset.

“My favorite thing about the priesthood is the people,” Father Mickiewicz reminisced at his 25th Anniversary as the Pastor of St. John Neumann. “The priesthood would be nothing if you didn’t have the people. You must be present to the people.”

Father Bill loved gardening, food, movies and the especially the theater. He loved the performance and the critique and was always immersed in the philosophy of it all. He loved to read and he often took current movies and books and applied them to scripture. He loved to travel and was especially fond of the country of Bosnia and the Bosnian priests he sponsored and their families and cities he came to love. He was a beautiful man with a gentle spirit, a hearty laugh and a heart bigger than most.

Father Bill will be greatly missed!

He was pre deceased by his parents Leo and Margaret Mark Mickiewicz-Dill. He is survived by his sister Suzanne Mickiewicz-Jarusiewicz of Old Bridge, and his nieces and nephews Beth Pastuszak and her husband James of Landsdale, PA., Lori Lee Szpara of Metuchen, and Edward Jarusiewicz III and his wife Kelly of Spotswood along with his great nieces and nephews.

Visiting will take place on Sunday from 3-6 PM at St. John Neuman R.C. Church 398 County Road 513 in Califon. A Mass of Christ the High Priest will follow at 6 PM. Mass of Christian Burial will take place on Monday at 10 AM at St. John Neumann Church and interment will follow at New Calvary Cemetery 490 Washington Road in Parlin. Arrangements are under the direction of Gleason Funeral Home in Somerset. Contributions in Fr. Bill’s name may be made to St. Jude’s Children’s Hospital at www.stjude.org
Read Less

Consider providing a gift of comfort for the family of Rev. J. William Mickiewicz by sending flowers.

We encourage you to share your most beloved memories of Rev. J. William here, so that the family and other loved ones can always see it. You can upload cherished photographs, or share your favorite stories, and can even comment on those shared by others.

Posted Aug 25, 2020 at 05:51pm
Although it is such a sad loss for all of us, my heart is a little more full knowing that my Mom & Dad were some of the many that welcomed him to Heaven.
Comment Share
Share via:
JL

Posted Aug 17, 2020 at 12:13pm
Those of you who know me know the line, “Once in a while you can get shown the light, in the strangest of places if you look at it right”, from the Grateful Dead song, “Scarlet Begonias”. In 1984, Bucky and I attended our first St. John Neumann Mass at the Methodist Church in Califon – we lived in Warren, 35-40 minutes away. We continue that commute to this day. This was all started when we met this amazing kindred spirit, Fr. Bill. It was really instantaneous, and as I had been involved with Sufis and the Episcopal Church, and never imagined that I would find such a revelation in the Catholic Church, I was unprepared but more than ready to give it a chance…”Once in a while you get shown the light” indeed. Fr. Bill’s openness to new music, to electric instruments, to congas and tambourines, to singing folk songs such as “Give Yourself to Love”, to dancers…and on and on…and then one day he started a homily with “Once in a while you can get shown the light, in the strangest of places if you look at it right.” Sadly I wasn’t present, but Gerry Brisson filled me in and even said that Fr. Bill had given me credit for writing the song…if only. Fr. Bill and the St. John Community that has come together over the last 36 years (it’s always the people!) awakened me to Christ in a way that no one else had been able to. The last time I saw him, in February, we spent 3 hours together at HUFF. I was down on myself and full of self-judgement and even God-judgement as being unworthy of God’s love, but as always Fr. Bill reminded me to move beyond the image of God on a throne to that of the Holy Spirit moving through all of us…and deep Love…’perfect love casts our fear’. I will always love you Fr. Bill and thank you and God for your being in my life and the lives of my family. As Jaki Fesq stated in an earlier tribute in her quote from the Broadway show Wicked: "Who can say if I've been changed for the better… But because I knew you I have been changed for good."

“Once in a while” indeed.

Posted Aug 16, 2020 at 12:28pm
From Narnia to Hogwarts and everywhere in between you were a priest like no other...you were authentic and that’s all you asked of us. Your homilies were engaging (sometimes lengthy!) and thought provoking. You challenged us, blessed us and brought us together as the Catholic Community of St John Neumann. We sang, danced, auctioned, picnicked, celebrated, mourned and grew closer to Christ because of you. You will always be in our hearts and we are forever grateful for your presence in our lives.
Comment Share
Share via:
KB

Posted Aug 16, 2020 at 10:30am
Like others who have posted, Fr. Bill married Dave and I at Kirpatrick Chapel at Rutgers in September 1978. When we moved to Califon, we were surprised to find that he had moved to Hampton. The rest, is history. We joined him in both the Methodist and Presbyterian churches before moving in to SJN. He baptized, confirmed and celebrated First Eucharist with all of our children. He was well-read, highly intelligent, and had an inimitable way of bringing scripture to life. He is a part of our history and of the fabric of our lives. We will remember him always and are forever grateful to have known him. 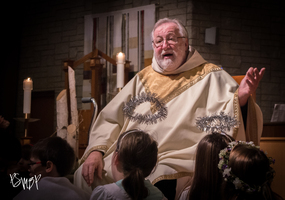 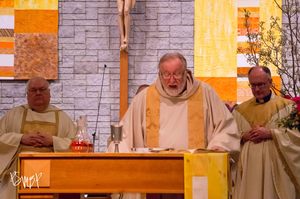 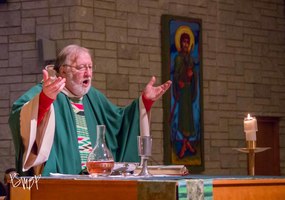