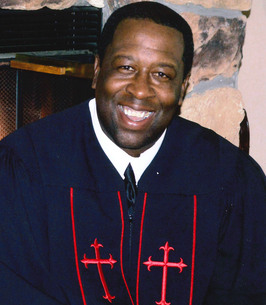 Edgar a/k/a “June” was born September 15, 1962, in Newark, New Jersey, the son of Edgar and Hattie (Hudson) Milton. Edgar Milton graduated from Clifford J. Scott (CJS) High School of East Orange, New Jersey, Class of 1980. It is at CJS that he met, who would later become the love of his life, Concetta Smith; and they became platonic friends. This platonic friendship stayed strong, and then one day they realized they had a stronger bond that can withstand the test of time. On December 02, 1988 Edgar and Concetta entered into holy matrimony. This union begat two of the greatest joys of their lives, sons: Derek Lee Milton (eldest), and Denzel Chad Milton. The family resided in Maplewood, New Jersey before settling in East Brunswick, New Jersey.

Edgar studied Business at Montclair State University, where he also played football, and became a member of Phi Beta Sigma Fraternity, Inc. As a true servant, Edgar became gainfully employed at UPS, where he was able to fulfill his assignment as “UPS Junior”, touching the lives of all that he met, employees and customers, and leaving an indelible impression. Edgar later served in management, and hailed a successful career with UPS for over 30+ years, before retiring.

Edgar embraced his call to ministry at New Hope Baptist Church in Newark, New Jersey, on September 3, 2000, where he served as an Usher, and later became a Captain on the Usher Board. Brother Edgar, and his wife, transitioned to Christian Love Baptist Church, under the pastorate of the late Reverend Dr. Ronald B. Christian, in 2002, where they served on the ministerial staff, and served the greater community. Edgar was later ordained, and become an Associate Pastor on September 15, 2002 at Christian Love; where he and his wife served faithfully until 2010. In this same year, Reverend Edgar, and his wife Reverend Connie, founded Milton Ministries, where they provided Biblical and spiritual guidance to the residents at Lincoln Park of Newark, New Jersey on Sundays. In 2020, as a couple, they began providing virtual Bible Studies bi-weekly, every Sunday and Wednesday, up until the day of his departure. Additionally in 2020, Reverend Edgar joined the ministerial staff of Miracle Baptist Church of Plainfield, New Jersey.

Always looking to connect his spirituality with his passion to befriend and uplift men, Reverend Edgar co-founded, and served as a dedicated member of the Network of Christian Men, Inc. Edgar enjoyed traveling with his wife, and over the past few years they were blessed to have traveled to Kingston, Montego Bay, and Ocho Rios Jamaica, and Punta Cana Dominican Republic. Deemed “Gus Jr.” by his family, Edgar also loved to cook, and his amazing grilling abilities were obvious from the first taste. Edgar was an avid New York Yankees, New York Giants, and Michigan Wolverines enthusiast. No sports team, however, could compare to him watching or coaching his boys' teams. With the same enthusiasm, he supported his oldest son as the coach of his eldest grandson’s little league football team. Edgar was preceded in death by his sister, Renee Milton.

Reverend Edgar is survived by his loving wife of 34 years, Reverend Concetta Milton; his sons, Derek Lee Milton, and Denzel Chad Milton; his parents, Edgar, and Hattie Milton; his sister, Sheila, and her husband Reverend Patrick Davis Sr., his Aunt Betty (James) Horton, his mother-in-Law, Deaconess Carrie King, his sister in love, Reverend Catherine Griggs, and her husband John Griggs, his brother in love. He is also survived by his grandchildren, Ayden, Titan, and Derek Jr., his niece, Juanita; nephews: John ‘JD’, Malcolm, and Patrick Jr, a beloved uncle, Reverend Richard Lawson, a host of cherished cousins, and extended family.


In addition to flowers, please consider donations in Reverend Edgar W. Milton’s name to the Network of Christian Men Inc. via Cash App at $NOCMNJ or PAYPAL at https://www.paypal - https://www.paypal.com/donate?hosted_button_id=
VXLY662N9ULA6