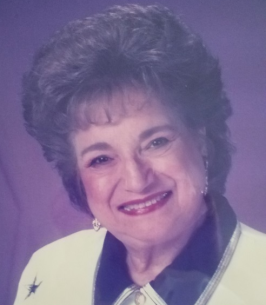 Born and raised in Perth Amboy, she has lived in Edison since 1951.

Marie worked as a Bookkeeper at the Raritan Arsenal in Edison as well as several other companies until her retirement. In her retirement years she worked with her church and ministered to friends and neighbors. She is remembered for her love of people and her faith. During WWII she worked as a ‘Rosie the Riveter’ at the General Motors Plant in Linden.

Her husband, Samuel D’Amico died in 1997. She is also predeceased by her 8 siblings.

Surviving are her sons and daughters-in-law, Alan & Patricia of Fanwood, Angelo & Cindy of Jacksonville, Florida and David & Laurie of Jupiter, Florida; 7 grandchildren, Christopher and Patrick, Mark and Brian, Diana, Drew and Danielle; and several great-grandchildren.

Funeral service and entombment will be held on Thursday, June 16th at 1 PM at Franklin Memorial Park, 1800 Route 27, North Brunswick.

Professional services have been handled under the direction of the Gleason Funeral Home, Somerset.