To share your memory on the wall of Loraine Patterson, sign in using one of the following options:

Print
Loraine Patterson was called home to be with our Lord Jesus Christ eternally on Sunday, May 16, 2021.

Loraine was born on February 7, 1950 to the late Jerome and Theresa (Larson) Surretsky, and resided in Edison NJ.

Sh... Read More
Loraine Patterson was called home to be with our Lord Jesus Christ eternally on Sunday, May 16, 2021.

Loraine was born on February 7, 1950 to the late Jerome and Theresa (Larson) Surretsky, and resided in Edison NJ.

She attended John P. Stevens High school and graduated in 1968. She received her Bachelors egree from Glassboro State College in 1972. After graduation, she became a teacher for a stint. Then Loraine served as a Claims Agent at the Social Security Administration for 34 years before retiring.

After her marriage to Donald Patterson in 1974, she resided in Somerset, N.J. where she enjoyed her married home life, extensive family, friends, and neighbors. Traveling was a passion and she felt very blessed to have been to 16 countries. She was very happy to have traveled to the countries where her grandparents were from; Ireland, Russia and Denmark. She also traveled to Luxembourg where her husband’s family was from.

Loraine loved Broadway and 60’s music. She had an unwavering faith in God. She was an active member of many senior citizen groups and spent a significant amount of time volunteering for many local causes. She passed away from this world with the gift of having experienced a very full and happy life, spreading joy and unconditional love to all who were blessed to know her. She was a humble, sweet, nonjudgmental, virtuous soul and words cannot express how deeply she will be missed.

She was preceded in death by her husband Donald Patterson and her sister Elaine Surretsky.

In lieu of flowers, please consider donations to The Leukemia and Lymphoma Society.

In recognition that many friends will be unable to attend due to the current restrictions the funeral will be live streamed by clicking HERE. When prompted, please enter the passcode 130494.
Read Less

Consider providing a gift of comfort for the family of Loraine Patterson by sending flowers.

We encourage you to share your most beloved memories of Loraine here, so that the family and other loved ones can always see it. You can upload cherished photographs, or share your favorite stories, and can even comment on those shared by others.

Posted May 23, 2021 at 09:03am
Lorraine will surely be missed she was such a sweet and genuine person. I am happy to have known and worked with. Sleep in peace🙏🙏
Comment Share
Share via:
J

Posted May 22, 2021 at 03:54pm
RIP Lorraine, always a thoughtful beautiful soul. Thank you for always opening your home up to us. May you Rest In Peace! John, Janeen, Jaelynn, Trevor and Jared Gaffney
Comment Share
Share via: 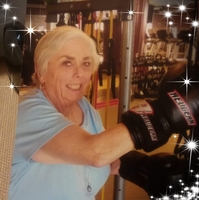