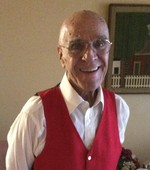 Born in Rome, New York, the sixth of seven children – six boys and one girl to Onorato & Theresa Orsini, his family moved to Albany when Joe was two. He attended St. John’s Academy where he played football all four years and was inducted into the Bishop Gibbons Sports Hall of Fame. He also attended St. John’s Church where he served as an altar boy. Upon graduation he was drafted into the US Army and sent to Fort McClellan in Alabama for infantry basic training. From February 1943 to December 1945 he served in the 45th Infantry Division in North Africa, Sicily and mainland Italy.

After his Honorable Discharge he worked for the State of New York in research and statistics. He then worked for the Mobil Oil Company for over 13 years before joining his brother in ownership of Academy Sales & Garage Automotive in Rensselaer, New York until his retirement.

Joe was a member of the VFW Post 1019, Albany and later transferred to Post 8692 in Colonie where he was an active member, helping with cookouts, cleaning the grounds, selling poppies and placing wreaths on veteran graves. For 35 years he was a member of the Color Guard and for 18 years served as its Captain. He also served as a Fire Marshall at the Beltrone Living Center in Colonie, where he was also an active member and volunteer, coordinating the weekly bocce ball games and participating in weekly poker games. In his spare time Joe enjoyed fishing, hunting, bowling, archery, stamp collecting and playing the guitar and trumpet.

Aside from his wife Lil, Joe is also predeceased by his parents, five brothers and sister.

Surviving are his son and daughter-in-law, Michael Orsini & Kelly Sullivan of Somerset, New Jersey; and grandchildren, Justin and Kaitlyn, and numerous nieces and nephews.

Graveside services have been held privately at Calvary Cemetery, Glenmont, New York. In lieu of flowers, please consider donating in Joe’s name to the Veteran’s charity or support organization of your choosing.

Professional services have been held under the direction of the Gleason Funeral Home, Somerset, New Jersey.