To share your memory on the wall of John Rudolph, sign in using one of the following options:

Mr. Rudolph was born April 01, 1936 in New Brunswick, NJ to the late George and Anna (Cornelson) Rudolph. He was a lifelong resident of Somerset County.

Jack served in the US Marines Core from 1954 to 1957 having attained the rank of Corporal. He remained in the reserves until 1963, when he was honorably discharged. Jack was a truck driver for Hermann Forwarding in South Brunswick. He owned and operated a home improvement company before working at MarketSource in Cranberry, where he specialized in maintenance and carpentry.

After his retirement in 2000, Jack wintered at North Hutchinson Island, Florida. He was an avid woodworker; he built treehouses, small airplanes and small boats. Jack also loved boating, fishing, camping and especially dancing.

He is survived by his loving wife of 65 years, Dorothy Rudolph; his son, John E. Rudolph Jr.; his daughter, Deborah Slomkowski; his grandson, Christopher M. Slomkowski. He is also survived by his sister-in-law, Caroline Ballow; his brother-in-law, William (wife Diane) Ballow and a host of nieces, nephews and extended family.

Funeral Mass will be held Friday, September 4, 2020 at 10:00 A.M. at St. Peter the Apostle in New Brunswick. Burial will follow at Franklin Memorial Park Cemetery in North Brunswick.

Consider providing a gift of comfort for the family of John Rudolph by sending flowers.

We encourage you to share your most beloved memories of John here, so that the family and other loved ones can always see it. You can upload cherished photographs, or share your favorite stories, and can even comment on those shared by others.

Posted Sep 01, 2020 at 08:54pm
Dear Dot, Jackie, and Debbie,
So sorry to hear of Jacks passing. Jason and I were reminiscing about old times in Griggstown. One of th things we spoke about was our trip Montouk, remember the paintingsof the ship Jack painted on Danny's chest he still talks about Uncle Jack's painting a tattoo on him. I got our the album of Oz's and mine 25 Anniversary , our cruise to the Caribbean . What a good time we had. Jason and I will try to come up Friday, but Thursday I have a Doctors appointment I have to keep.Love to you all and hope to see you soon.
God's Riches Blessing on your future.....Patt and Jason Osworth
Comment Share
Share via: 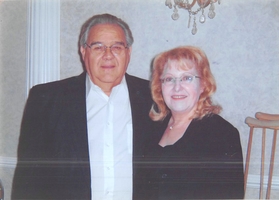