To share your memory on the wall of Joan Hughes, sign in using one of the following options:

Print
Joan Hughes, 86, passed away on Monday, January 18, 2021 at her daughters’ home in Somerset, New Jersey.

Mrs. Hughes was born May 16, 1934 in Jersey City, New Jersey to the late Daniel and Sarah (Hogan) Quinn. She lived in Ridgefie... Read More
Joan Hughes, 86, passed away on Monday, January 18, 2021 at her daughters’ home in Somerset, New Jersey.

Mrs. Hughes was born May 16, 1934 in Jersey City, New Jersey to the late Daniel and Sarah (Hogan) Quinn. She lived in Ridgefield Park and Old Bridge, before settling in Franklin Township.

Joan was a legal secretary for Hellring Lindeman of Newark, where she worked for over 20 years. Joan was an avid traveler and enjoyed spending time with her family and friends.

Mrs. Hughes was preceded in death by her loving husband in 2009, Lawrence Hughes.

She is survived by her five children, Mary Beth and her husband Wayne Wall of Florida, Daniel and his wife Rose Hughes of Grand Cayman Island, Patti and her husband John Ferretti of Somerset, Peggy Bynum of Arizona and Michael and his wife Amy Hughes of California. She is also survived by her grandchildren, John IV, Morgan, Jerry, Connor, Benjamin and many extend family and friends.

Funeral services will begin at 5:00 P.M. on Sunday at the Gleason Funeral Home.

In lieu of flowers, please consider donations in memory of Joan F. Hughes to the American Alzheimer’s association at www.alz.org.
Read Less

Consider providing a gift of comfort for the family of Joan Hughes by sending flowers.

We encourage you to share your most beloved memories of Joan here, so that the family and other loved ones can always see it. You can upload cherished photographs, or share your favorite stories, and can even comment on those shared by others. 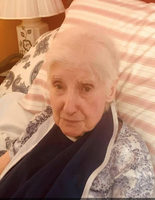