To share your memory on the wall of Howard Allen, sign in using one of the following options:

Howard Joseph Allen Jr., 90, most recently residing in Cape Coral Florida, peacefully passed away on March 21, 2021 with his son b y his side.

Howard Joseph Allen Jr., 90, most recently residing in Cape Coral Florida, peacefully passed away on March 21, 2021 with his son b y his side.

Howard resided in New Jersey all of his life until moving in December of 2020 to Florida for health concerns. Howard proudly served in the Korean War and was awarded the Good Conduct Medal. He was honorably discharged from the Air Force in 1952.

Howard was employed by Colgate Palmolive and at the ag of 55 retired and started a second career with JP Morgan Chase.

He is predeceased by his loving wife Margaret Allen whom he married in 1955. They were married for 63 years.

Howard was a true family man and will be missed by many .
Read Less

Consider providing a gift of comfort for the family of Howard Allen by sending flowers.

We encourage you to share your most beloved memories of Howard here, so that the family and other loved ones can always see it. You can upload cherished photographs, or share your favorite stories, and can even comment on those shared by others. 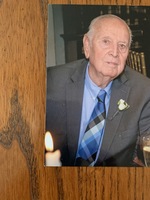