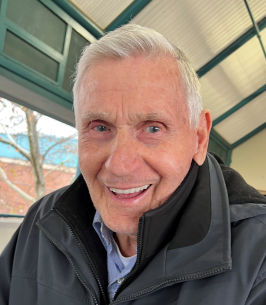 Mr. Dennis Stuewe passed away peacefully on Wednesday morning June 29, 2022 at his home in Somerset. He courageously battled Alzheimer's for eight years with a positive, pleasant, never give up attitude.

Mr. Stuewe was born the second of twelve children to Howard and Esther Stuewe in Hamburg, Minnesota. He was raised in Minnesota and graduated from Central High School in Norwood Young America, Minnesota where he was an exceptional student and athlete. Dennis ran track, played football, and basketball. He continued his education at the University of Nebraska where he received a full scholarship to play football. After graduating, his athletic career continued playing professionally for the Minnesota Vikings and the New York Jets from 1964-1968.

He resided in Edison for a short time where he met the love of his life, Rita Kane, marrying on June 19, 1971. The young couple relocated to the Somerset section of Franklin Township where they would raise a family of their own.

Mr. Stuewe had a lengthy career as a physical education teacher in the Warren Township Public Schools system. He retired in 2000.

Mr. Stuewe was a longtime parishioner of St. Matthias Church in Somerset. He was an usher at the 9 AM Sunday Mass for many years. He also volunteered his time for many years at the St. Matthias Carnival and for a number of those years, he served as the Carnival Co-Chair. Through St. Matthias, he was able to volunteer on a trip to New Orleans, during which he helped families rebuild their homes after Hurricane Katrina. He was always a kind and giving person, always helping those in need.

Mr. Stuewe loved to garden and was quite the handyman building decks as a side job during the summer months. He was actively involved in the community coaching Franklin Township Little League baseball, and helping coach the Franklin Pop-Warner football team for many years. He also enjoyed playing pick-up basketball at Rutgers Prep on Sunday mornings when his children were younger, having weekly breakfast gatherings with his retired teaching pals, golfing with his friends, and watching the Yankees, Jets, Nebraska, and Virginia Tech football games on television.

Mr. Stuewe enjoyed visiting his family in Minnesota and was always up for a good game of sheephead with his 7 brothers talking about the old days on the Hamburg farm. He thoroughly enjoyed traveling all around watching his children’s, and later, his grandchildren’s various sporting events. He was a humble man, always there, supporting them all, with a smile on his face.

Mr. Stuewe was predeceased by his sister Dorlene and brother-in-law Fred Thiesfeld, and sister-in-law Monique Stuewe.

He had 9 grandchildren, Chase and Kane Quenault, Michael, Matthew, Luke and Gabriel Stuewe, and Riley, William, and Jack Hayes.

Visiting will be held from 3-7 PM on Tuesday, July 5, 2022, at the Gleason Funeral Home in Somerset. Services will begin on Wednesday the 6th of July at 9:15 AM at the funeral home followed by a 10 AM funeral mass at St. Matthias Church in Somerset. Committal services will follow at Resurrection Mausoleum in Piscataway. Please consider a contribution in Mr. Stuewe’s name to the St. Matthias Tuition Angels Fund, 170 John F. Kennedy BLVD Somerset NJ 08873