To share your memory on the wall of Carol Irwin, sign in using one of the following options:

Mrs. Irwin was born February 10, 1946 in Manhattan, New York to the late Michael and Pasqualina (Cicerelli) Russo. In 1977, she relocated to Kendall Park and resided there until 1998. She then relocated and settled in Parlin, NJ.

Carol started her career at Johnson and Johnson in Skillman as a factory worker for many years. She went on working in accounts payable at BASF in Jamesburg. Before Carol’s retirement, she was an aid and para for Sayreville School System. Carol was a devoted and faithful parishioner at St. Lawrence Roman Catholic Church in Laurence Harbor, NJ. She was an avid Yankee fan and loved to bowl. She also enjoyed many visits to Atlantic City to walk on the boardwalk and to try her luck at the slots. Carol adored her family, she especially loved watching her children and grandchildren play sports.

Mrs. Irwin was preceded in death by her spouse, Walter Irwin and her brother, Michael Russo Jr.

She is survived by her son, Scott Irwin and his wife Nicole of Edison; her daughters, Debbie Irwin-Dowd of Union Beach and Denise Purdue and her husband Will of South Brunswick. She is also survived by her sister, Francine Pearson and her husband Wayne of Florida; her sister-in-law, Nancy Russo; her grandchildren, Savannah, Tiffany, Nicholas, Shawn, Michael, Colten and Cavin and many nieces, nephews and cousins.

Burial and committal service will begin at 11:00 A.M. on Tuesday, February 9 at the Brigadier General William C. Doyle Memorial Cemetery in Wrightstown, NJ.

Donations are being accepted for: DISABLED VETERANS NATIONAL FOUNDATION.

Consider providing a gift of comfort for the family of Carol Irwin by sending flowers.

We encourage you to share your most beloved memories of Carol here, so that the family and other loved ones can always see it. You can upload cherished photographs, or share your favorite stories, and can even comment on those shared by others.

Posted Feb 26, 2021 at 05:59am
I am so sorry to hear of Carol’s passing. Carol and I met when she worked in the cafeteria at the Sayreville upper elementary school. We were friends ever since. She was such a kind beautiful person. Even after she left there, we continued to meet for lunch with some other friends. She would always reach out to see how everyone was doing. She will truly be missed. Such a good soul. She was so proud of her family. She would talk about them all the time with us. My deepest condolences.
Comment Share
Share via:
MS

Posted Feb 09, 2021 at 06:26am
This was a lovely service with much love shared for all. Carol's beautiful sense of giving and spreading of love was so profound and was evident in the hearts of her children for all to see. She was so proud of them and her grandchildren. Carol cared about all people and always put their well-being before her own. She would have been humbled by the kind words spoken of her as a mother and grandmother. She was selfless to the end and she has earned her place in heaven with her husband, Scott, whom she loved so dearly. I will always miss her exuberant greeting, "Hi Cuz" and ending--love you, Me. Love Always, Mary Ann
Comment Share
Share via:

Posted Feb 06, 2021 at 09:30pm
Your mom was the best! Carol's heart was always so full of love for her family. Relish in the wonderful memories of a life filled with an abundance of devotion for each of you. Prayers for the family.

Posted Jan 30, 2021 at 01:02pm
My heart goes out to the entire Irwin family. When our kids were growing up, we wouldn't miss a softball game for anything! And the 3 of us (Carol, Judy and I) would be the biggest 'fans' at ours girls games. We laughed and bonded at each game so beautifully. Those are the memories I will cherish forever! God bless Carol and may she forever rest in peace!
Comment Share
Share via:

Awww thank you for the kind words. My mom cared so much for you and Judy. Those were the good ole days!! Big hugs, Denise 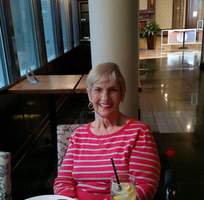